Why Is Emotional Intelligence Becoming Important In Business?

The end of the 20th century and the start of the 21st saw the creation of some interesting phrases and terms which are used to this day. Some of them are thrown around for no other reason than to look smart and interesting on the other hand, some terms actually have meaning and weight to them. Emotional intelligence is one of those terms, often shortened to EI. Why is it important in business? To answer that question, we will have to look at the definition of the term itself.

The term dates back to 1964, a paper by Michael Beldoch. It wasn’t until the 90s that the term became popular. Daniel Goleman, a science journalist wrote a book called Emotional Intelligence in 1995. The term gained immense popularity.

Emotional intelligence is the ability to recognize emotions in oneself and other people, to measure them and express them, but in a way which does not hinder constructive communication or a working environment. People can increase their EI and can learn to recognize emotions better and deal with them. Some have a natural ability to deal with their emotions and communicate without having them interfere in a negative way.

Why EI is Important for Businesses

When interviewing potential employees, the employers always look for emotionally stable people, but also those who can easily work with their emotions and deal with their own problems and that of others. If you have any sort of team, all the members should have a high emotional quotient number. Having a higher EQ can mean a more stable work environment.

Often, it is much better to hire a person who has a high EQ right from the start, than someone who has a doctorate or two, whose EQ is very low. The former is likely to learn the new things they need, while the latter is likely to break under pressure. Doctorates do not help in dealing with emotions and stress. 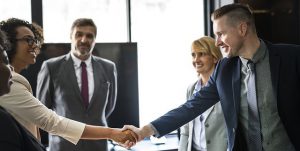 Daniel Goleman points at five qualities a person should have in order to have a high EQ. Self-awareness and self-regulation are the two most important. The first one tells the person their limits and comfort zones while the latter allows the person to manage their emotions and keep being productive. Motivation, empathy and people skills should all be self-explanatory. The first one helps the individual and the others the people around that individual.

Emotional intelligence is very important as every employee should be able to manage their emotions and keep all of their colleagues in check, as well as themselves. It is a skill important enough for you to look for it even in less skilled employees.